My Central American sojourn spanned my life from age two to  seven, and was contained entirely in the 1970’s. I guess there were some things we could get in the United States that we couldn’t get in Honduras, like apples that actually tasted good, but other things were totally transferrable:

My parents had this friend, I guess, named Polly Esther. It seemed like everybody knew her, but I never met her myself. I definitely remember asking who she was once or twice, and I don’t remember anyone laughing (amazingly), but I also don’t remember any answers to my satisfaction. My parents referred to her all the time it seemed, but I couldn’t figure out why they kept talking about her pants.

Or why my dad was wearing them. (American pants, people. Not British pants.)

My dad had this pair of spectacular polyester trousers which I called his “candycane pants.” This was because they had red-and-white vertical stripes. They were thin stripes, but not pin-stripes, and they were ridged like corduroy kind of, but not. The red stripes were not an overly brilliant red, but still. I can’t imagine . . . well, anyone I know, really . . .  wearing anything like that ever again. Daddy also had a pretty impressive moustache. 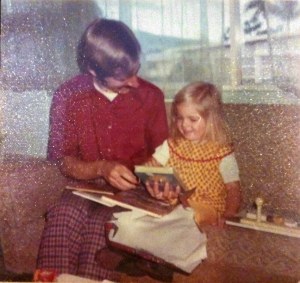 Evidently he went for plaid as well. I, too, seem to be wearing a nice little polyester number.

My mother, for her part, had a turquoise pair of polyester trousers, and they made this kind of squeaky swooshing sound when she walked.

I would totally wear her outfit today. If she still had it.

Actually, in those days, all grown-ups seemed to make that noise when they walked. I think my red trousers with Tweety Bird on the knee were made of polyester, too, and I remember trying to make that sound when I walked but I could never do it. Pretty sure I could now, though.

I know. You’re distracted. You’ve been over polyester for the last 60 seconds because you really want to see a better picture of my dad’s moustache. Stand back, everyone . . .

This is what missionary families looked like in the 70’s. Movember, eat your heart out.

You Will Never Hear Me Say

While it may be true that there are some things I would never say, I can’t promise you will never hear me say them.

Life in the Vine: Treasure

https://www.podbean.com/media/share/pb-meeaw-d3ea51 Deuteronomy 12:1-14 The way the fruit of God’s love through our Treasure demonstrates the extent to which all the other aspects of our lives really belong to Him. Pastor Jenn

And so we set out, not knowing exactly where the path will take us, but trusting and hoping, all the same. #SteppingIntotheStory #Week1

Whichever way you put it, the Jesus life is evidently a long journey…at a walking pace. A lot of things can happen between Here and There.

Here’s what happens in my soul when my body chemicals mess me up: I take my calling too personally and myself too seriously.