I wrote this paper for an Old Testament class in Seminary-the-First-Time. It’s a paper, but it’s also a story . . .

Alas for the Glory

OT512 – The Kingdom of Israel and Her Prophets 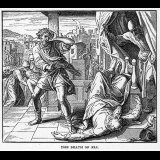 The death of ‘Eli

They say she sang at her son’s birth—a song about kings and the humble ones exalted.  A song about the glory of Adonai.  She named her son “Sh’mu’el,” that son she got from Adonai.  No wonder the song.  At my son’s birth I do not sing.  I cannot cry, even.  I say nothing but “I-Khavod,” for the glory has departed from Isra’el.  They think this is the name I give my son.  No matter.  What use a son now?  I did not ask for this son.  Even if I live beyond this moment, I will not see him grow up.

But I would have liked to see that Sh’mu’el grow up.  I had Achituv, a son already, before the glory went away.  But before Achituv, the woman brought Sh’mu’el just weaned, and I saw this was a different kind of child.  He was for Adonai, like not much else in Shiloh.  He even slept before the ark of God.  Special things were meant to happen through this child.  All the same, he would come to me and let me be something like a mother to him, and I loved him.

I loved him, and I loved ‘Eli, that silly fat man, the priest my father-in-law.  I think ‘Eli didn’t mean the harm he did.  I think I didn’t mean mine, either.  We simply sat and ate what we were given when my husband and brother-in-law came home.  Choice meat.  Rich, flavorful juices oozing from it, to run down hands and arms.  I had very little to do in preparing it, so I licked my fingers and smiled and pretended I was happy.  ‘Eli smiled and maybe really was happy.  Neither of us was strong enough to do anything else.

I had thought once that marrying a priest would be the greatest glory a woman could know.  What greater honor than to marry a man who served Adonai and Adonai’s people in the mysteries of the sacrifices?  The priest I married was Pinchas, named after the man who turned Adonai’s anger away from Isra’el when they had been whoring with the Moabites and worshiping their idols.  But my Pinchas was not that great Pinchas.  He was rather the opposite.  I have found no glory in being his wife.  I had two sons by him.  Many other women had many more by him as well.  I think I ate the sacrifices for a comfort.  I think I wanted to believe I deserved something good from Adonai, in exchange for this miserable husband.  Now, like my people, I have I-Khavod, and this is what I deserve.

A prophecy came to ‘Eli from a man of God.  Adonai was angry, the man said.  He had chosen our family to serve before him, and why did ‘Eli honor his sons more than Adonai, disrespecting the sacrifices, growing fat on them?  A prophecy came to ‘Eli through Sh’mu’el, too—poor boy, threatened into speaking by the man who would not discipline his own sons.  ‘Eli had spoken to his sons once.  Now, to Sh’mu’el, he said, “It is Adonai; let him do what seems good to him.”

But can this have seemed good to him?  Our people—Adonai’s people—went out to fight the P’lishtim—the idol-worshipers.  We were defeated and I knew why.  My husband.  His brother.  All of us who keep silent because we are the true idol-worshipers.  We worship the sacrifices and our bellies.  We do not know Adonai.  But I could scarcely have thought what would happen next.

“Why has Adonai defeated us today before the P’lishtim?” asked the elders of my people.  “Let’s bring the ark for the covenant of Adonai from Shiloh to us, so that he will come among us and save us from our enemies.”  My husband and his brother brought the ark and marched with it straight toward the P’lishtim, and all this time I have sat here with my baby inside, silent, waiting.  All this time, ‘Eli has sat, blind now, by the gate, silent, waiting.  Pinchas would die.  His brother would die.  We knew the prophecies.  But what of the ark of God?

Then this evening—was it this evening?—there was a commotion by the gate.  I made to go out, but someone rushed in, instead:  ‘Eli dead in the gate of shock, Pinchas and Hofni dead, the ark of God—captured?  I have never felt pain like this—crushing and searing at the same time.  It squeezed out my breath, so that although I would have liked to wail, I could not.  The pain was not the baby.  But the baby came as I bent under the pain, under the weight.

I have been silent, all these years.  I have said nothing as I ate the meat, nursing my hurt, ignoring the glory of Isra’el—and now the glory of Isra’el has gone into exile, because the ark of God has been captured.  Now I die from a child who will not live to be old:  I-Khavod—where is the glory?  We have treated Adonai as an idol, and now he behaves as one—he does nothing, as his throne is carried to the cities of idol-worshipers, and the priest’s family disappears, without glory, for the glory is gone.  Could Adonai not save himself?  Does his power wane when we forget him?  Or is it that he would not save himself for a people who treated him falsely?

“’Look!’” Sh’mu’el had said, brave and trembling before ‘Eli, speaking the words Adonai himself had spoken to him.  “I am going to do something in Isra’el that will make both ears of everyone who hears about it tingle.  On that day, I will do against ‘Eli everything I have said with regard to his family, from beginning to end.’”  My ears ring with the silence.

But they say she sang at his birth, and I cannot quite forget that—a song that Adonai kills and makes alive; he brings down to the grave, and he brings up.  Adonai makes poor, and he makes rich; he humbles, and he exalts.  I-Khavod is born and I cannot even cry, for we are humbled by Adonai.  But there is still Sh’mu’el.  He is not of our blood, and he was always a special child, with a song above his head.  Maybe—it may just be that, after ‘Eli’s family is gone, Adonai will rouse himself in power again, and allow his glory to return to Isra’el.  I will be silent now, and wait.

8 thoughts on “Alas for the Glory”