Remember that complicated guestlist? Well, the final festivity of all the wedding festivities involving all the complicated guestlists is upon us . . . on Saturday, three and a half months after the actual wedding. I guess it made my Paul nostalgic or something, because he has spent the last two days tweaking and retweaking his reminiscences of our curmudgey–honeymoon, I mean. Without further ado, then, the first ever That’s a Jenn Story Guest Post, written by my Paul:

In honor of our summer wedding party, I thought I’d share some random observations  from our Montreal honeymoon.

We’ve decided to call this our Curmudgeymoon, because as we sit together on the couch our stomachs are grousing at each other like Statler and Waldorf in the Muppets balcony.

A random cafe in Old Montreal, 10 degrees out, my first smoked meat sandwich. We met Rafael, a period tour guide dressed in  1700’s french military regalia. Turns out he lived in [Our Fair City] for several years. He told me that I am a very, very lucky  man, then directed us to a place to buy Jenn some gloves so I could have mine back. 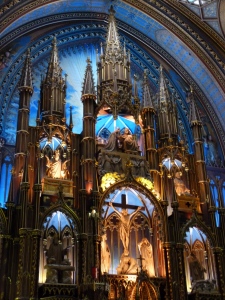 A trip to Mount Royal park, Jenn’s first time on snowshoes. Two feet of snow, trekking through the woods, doesn’t feel like  the city. Beautiful, crisp, impossibly bright day. The cure for Jenn’s migraines is fresh winter air. We walked the loop to the  iron cross, then to the chalet for a chocolate hydration drink. We took pictures overlooking the downtown skyline, then  headed back down to a restaurant known for some of the best Poutine (pronounced Poot-zine) in Montreal. This is lumberjack  food–french fries cooked in pork lard, smothered in cheddar cheese curds and gravy. A multitude of topping choices include smoked meat, sausage, hotdogs, hamburger, onions, peppers, bacon, and even guacomole for the vegetarian crowd. Who are eating potatoes fried in pork lard. 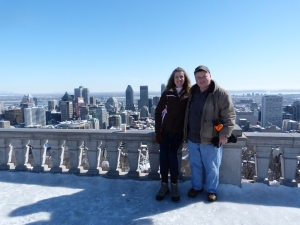 Poo-what?
So delicious, so ridiculous.

Rue Mont Royal, the neverending Newbury St of Montreal. We stopped at L’Orange Presse for breakfast, and were waited on by a  perfectly lovely French mother, as wide as she was tall. She spoke no english, but was very sweet. She reminded me of a  nesting doll, I kept waiting for her to split open and a smaller version to step out. Fresh squeezed OJ and the food was delicious. She saw us saying grace and stopped to say that she approved, and that she does the same. In French, of course,  Jenn had to translate. I’m getting a lot of practice in smiling and nodding.

It’s March, guys. Where does the freshness come from?

Underground Mall day started with a walk down the length of Ste. Catherine St, past Berri-Uqam station (which sounds like Berry Pecan), a stop at Lavazza for lattes and scones, and a wander through a really cool Chinatown for gifts to bring home. We continued on and found an entrance to the Montreal underground, a series of tunnels, shops, and stores that connects the downtown. With the winters these people get, I don’t wonder that they burrow underground to avoid it. A nice man who wanted to practice his English gave us directions, and off we went. The tunnels were full of modern art exhibits, some of them interactive. Jenn got to practice her hopscotch for an eighth of a mile on one of them. We arrived in the section that had most of the shops and stores, and stopped for lunch. I know I keep mentioning food, but the thing that surprises me here is the quality and freshness  of it. It’s winter and all of the tomatoes taste like tomatoes. The smallest corner store is stacked to the ceiling with fresh fruit and vegetables. Picture a Honey Farms with two Trader Joe’s crammed inside. You can’t get a bad meal in this town. The shopping malls were a surprise. If you took the Natick Mall, Copley Place, and Providence Place mall, dug a hole, and buried them next to each other, you still wouldn’t have shopping the size of this place. Here’s where the signage peters out, much like a casino they’re not big on telling you how to leave. I’m pretty sure the walls had scanners reading the mag stripes on our credit cards, once they max out the exit sign turns on. By this time our legs were blown, and the Metro ride back was a relief.

We agreed that on our last day in Montreal we would play Whack-a-Mole. This would consist of our purchasing subway day passes, jumping off at random places, and sticking our heads above ground to see what was there. We did this for a few stops, only to discover after too much coffee that shops and stores in Montreal aren’t required to have public restrooms. Our next stop was Olympic village (which had facilities, thank the Lord!) and we decided to tour the Biodome. A big building full of plants sounds boring you say? Not when it’s low 20’s and windy out. I got in line and purchased tickets from a woman who  spoke only French. I suspected something was wrong when we walked quite a long distance to the Biodome entrance, then saw another admissions line. I asked a woman who told me that our tickets were for the RV show going on in the main stadium. We  agreed that this too would be fun and warm, so we headed back.

I’m pretty sure every RV known to man was at this show. We kept turning corners, thinking it would be over, only to enter another area filled with more elaborate and ornate versions of Home Sweet Mobile Home. Who knew there were so many human terrapins willing to shell out beaucoup bucks on wheeled abodes? We turned another corner and entered the main body of the stadium, overflowing with RV’s like a Mentos dropped in Coke. There they had the Ultimate Behemoths, RV’s with tractor trailer motors and more popouts than a Transformer movie. Jenn and I climbed aboard one selling for the low, low price of $268K Canadian. I was half expecting to be greeted by a concierge. This machine had leather recliners, black marble floors and counter tops (weight’s not a problem–diesel’s free, right?), cherry cabinets, and mirrors in the bedroom like a bad 80’s California waterbed. Everywhere there were signs saying don’t touch, don’t sit, s’il vous plaît, and velvet ropes to ensure the huddled masses stayed in steerage. One such rope was stretched across the bathroom door, and as Jenn and I walked past a boy of three or four ducked underneath and began fumbling with his zipper. We looked at each other and smiled, not quite believing our eyes. As we exited we heard the boy’s mom yelling in a high pitched voice NO! NO! NOOOO!… I’m thinking the price might have dropped a thousand. 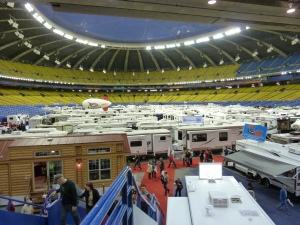 My five star Yelp review: For the last night of our honeymoon, we were looking for something special. We found it and more at O’Thym.  We were staying nearby, popped in to make a reservation, and were told that dinner seatings were at 6 and 9. We chose 6, and  were greeted by a gentleman who was kind enough to warn us off of the table near the door,”because of the smokers” and  seated us near the window. Our waitress Vanessa was cheerful and helpful in a genuine way, not with a forced smile for the  American tourists. She was very busy but attentive, an excellent waitress. We brought our own bottle of French red that we had purchased earlier; I only wish we had brought a better wine to complement the delicious food. We started with an entree,  my wife had a veal liver dish with pistachio and star anise, I had foie gras in a pastry with fig sauce. The flavors were intense. The Trou de Normand, or palate cleanser, was a lemon sorbet in citrus vodka served in a martini glass with rind  and a sprig of mint. It was the ideal setting for the next course. My wife’s lamb chop plat was superb, and my filet mignon was the finest piece of beef I’ve ever had. For dessert we both had a concoction of spiced pears, Cointreau, tamarind, and cream that was the perfect ending to a wonderful meal. Any anniversary visit to Montreal will certainly include a return to  this place; it was a consummate ending to our week of celebration.