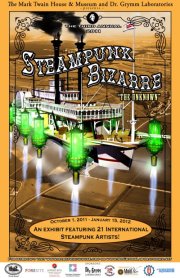 Poster for the Mark Twain Exhibition

Here’s the thing about my new eBay hobby–it’s hard to sell things on there without looking to see what’s for sale there, too. I’ll confess to having bought one or two items on there since I started acquiring money in my PayPal account. I’m pretty good, though, usually, at finding a good deal or, more likely, just letting them all pass by. More than actually purchasing, though, I’ve found myself browsing. A lot.

Which is how I first came across the term steampunk. I found a vendor who sold “elven”-style jewelry, and while looking through her wares, found a few with the steampunk descriptor. Some of the things I thought were quite horrible (mostly things involving spiders and eyeballs), but other things were rather intriguing and kind of struck my fancy.

Like most things, I had a very early introduction to the steampunk concept but without knowing it (kind of like being born in the 70’s and only lately becoming interested in the era, or living in Latin America during the 70’s and later discovering just how hip and era-appropriate that was). During my sophomore year of college, I had a suite-mate in my dorm who was quintessentially steampunk, but that was the early 90’s and the term had scarcely been coined yet. I certainly never heard it. Still, Vintage-Bonnie, who had transferred in from somewhere else that fall, wore long black Victorian outfits, put her hair up in a Victorian styles (often incorporating black hairnets) and, having been injured pretty badly in a car accident a year or so before, walked with a cane. She hung out with the art-crowd, some of whom were more or less goth, but, apart from one guy whom she dated for a while, no one else really quite had quite the same style, flair, vibe going on. Not that there was anything specifically religious or irreligious about it, but she stood out somewhat on our small Christian college campus. Roommate-Jenne and I were, I think, simultaneously fascinated and bemused by everything about Vintage-Bonnie.

For the most part, Vintage-Bonnie kind of filled a niche of her own in my experience and observations, because while in college she was one of a kind, after college I never met anyone quite like her either. There were echos of it, of course. I mean, I was an English literature major. I had read Frankenstein, for goodness’ sake. (It probably doesn’t really do to confess that I haven’t, on the other hand, ever read anything by H.G. Wells or Jules Verne.) I had studied Victorian literature and the Victorian era. I’ve seen Edward Scissorhands (which, I suppose isn’t strictly steampunk, but I would argue it shares some elements).

Still. I only ever encountered the term for the first time a couple of weeks ago. Then last weekend I took The Boyfriend to the Mark Twain House and Museum in Hartford, Connecticut, because he’s a big fan of the man (and his aphorisms). In the museum, there was an entire exhibit by steampunk artists, more or less loosely inspired by Mark Twain himself. (Apparently Twain–whom the museum staff insist on calling “Sam Clemens,” arguing that “Mark Twain” was his most famous character–is a steampunk honoree, on account of having written an early time travel book in the form of A Connecticut Yankee in King Arthur’s Court.)

“What,” I asked the Boyfriend, “is steampunk?”

The thing is, I felt like I already sort of knew. Goggles and gears and airships and aether, clunky and grandiose and a little bit creepy. Actually, some of the things in that exhibit were a lot creepy. Eyeballs and brains and things. The Boyfriend’s and my favourite thing was this amazing black Victorian-style dress with long gloves and lace and a brass watch and other such things, although the story surrounding it was about a dead girl or something. The dress is made of jersey material which is part of why it’s so fabulous–it drapes marvelously–and I emailed the young woman who made it just for fun and asked how much she’d sell it for, because by this time I’ve practically forgotten about the associations with death. Let’s just say it’s . . . more than I’ve paid for anything on eBay.

I haven’t forgotten that I want to be a hippie. I’d still like to toodle across the country (or maybe back down to Latin America) in my Vanagon (and check this out!). There are still things about hippie-dom that I’m not a fan of, either–the promiscuity, the drugs, the paganism. There are things about steampunk that I’m not a fan of as well–the darker side is definitely not me. I feel no need to have a fake brain in a jar in my house, reciting Poe’s Telltale Heart ad infinitum. Someday I may write a blogpost about some of these subcultures which are, in many ways, so intriguing–nay even alluring–to me and their emphasis on death, and try to imagine the reasons why. (I already have some imaginings.)

In any case, I belong to the Church (well, I belong to Jesus, but the subculture of which I am a part is known as the Church), which is frankly more than quirky enough. Signing up for one of these other subcultures sounds like just too much work. There does seem to be some cross-over or at least haziness of definition between some of them, cf. eBay entries for items described as Vintage Goth Grunge Boho Hippie Steampunk, or Hippie Boho Tribal Gothic Steampunk Gypsy. Gotta cover all the bases, I guess. Anyway. I guess what I’m saying is, I won’t be slicing my finger with a penknife and signing any documents in blood or anything like that.

But I am a sucker for clothes. And watch innards aren’t bad.

You Will Never Hear Me Say

While it may be true that there are some things I would never say, I can’t promise you will never hear me say them.

Life in the Vine: Treasure

https://www.podbean.com/media/share/pb-meeaw-d3ea51 Deuteronomy 12:1-14 The way the fruit of God’s love through our Treasure demonstrates the extent to which all the other aspects of our lives really belong to Him. Pastor Jenn

And so we set out, not knowing exactly where the path will take us, but trusting and hoping, all the same. #SteppingIntotheStory #Week1

Whichever way you put it, the Jesus life is evidently a long journey…at a walking pace. A lot of things can happen between Here and There.

Here’s what happens in my soul when my body chemicals mess me up: I take my calling too personally and myself too seriously.