I think I’m about to be sorry.

I have, you may be aware, this love/hate relationship with bumper stickers, primarily, I suspect, because they end up being like oft-told jokes–once you see one, you see it again a million times and they lose their punch. Also because usually they’re very polarised–either way too left-wing or way too right-wing (and either way, often quite scornful and rude) for my just right-of-centre sensibilities.

I’ve been wanting to get one for my car regardless. I used to have one with the initials of the Living History Museum for which I used to work, when Bela Corolla and I were tootling around the backroads and blue-green-Corolla-laden parking lots of New England. It was a good little car-identifier, since I didn’t have a keyfob that made the car beep. I didn’t have a keyfob, or even electric windows, for that matter. The youth group kids used to get in the car and exclaim with something that sounded really close to awe, “Miss Jenn! You have old school windows!” Then they’d have to try them out.

Anyway, now I have Kermit the Altima who is green and of still fairly ubiquitous styling, but a little more identifiable and also who has a beep-and-blink-inducing keyfob. (The youth like him because they’re taller now and they fit inside Altimas better than Corollas.) But I find that I would still like to have a bumper sticker. I don’t just want any bumper sticker, though. It has to be the right one. Kind of like a tattoo. Of which I have none, by the way–in case you were wondering.

Every once in a while I’d see something that I thought I liked, and then I’d think about having it on my car until I finally wear it out (the car, but maybe the bumper sticker, too) and I realised I didn’t like it that much. And then about a week ago I was driving and a car passed me, and on the back of that car was a single word: Forgive. Maybe they make a practice of passing people and that’s their way of apologising, but it’s not like they cut me off or anything, so they didn’t really need to.

Anyway, when I saw it, I didn’t think of that. I thought, That’s it! Forgiveness is the core of the Gospel–the whole point of everything, really–and it totally reminded me of Jesus without being a Ichthus fish (which, sadly, no longer remind me of Jesus). I frequently say I don’t want to reduce Jesus to a bumper sticker, and I don’t, so maybe it’s hypocritical to be impressed by a bumper sticker that, in a way, does just that. But I guess I was hoping it wasn’t a reduction, although it was simple and minimalistic–I guess I thought it said everything that needed to be said. By a bumper sticker, anyway.

So I went on line and found one I liked the looks of enough that was about as inexpensive as could be, and I ordered it. I suspect I’ll get it tomorrow. Or maybe Friday. I will put it on my car and I will have my bumper sticker. And then I will be conscious of driving around with a “Forgive” bumper sticker, and of all the things for which I need to be forgiven, and of all the things I need to forgive. When I was in London I remember reading Matthew 18 (not for the first time) and being struck with the idea that I didn’t really know what it was like to struggle to forgive (such that it would truly be difficult for me to forgive someone in order to be forgiven myself) because I had as yet never been wronged that greatly. I remember being concerned when I became conscious of this thought, because I was pretty sure it meant someone was going to do something that would be very hard for me to forgive. Not too long afterwards, they did.

It still wasn’t a big deal in the grand scheme of things. People have much worse things to forgive all the time. But I wonder if, when I put a “Forgive” bumper sticker on my car, I will find my resolve to do so tested again and again. I hope not, but I’m not counting on avoiding it. And if that happens, I really may be sorry. In which case . . . will I have to forgive myself? 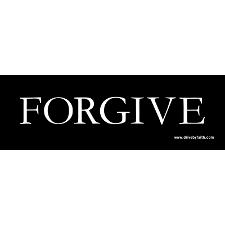